This guide will teach you everything you need to know about how to become a United States citizen.

There are 3 main steps to applying for U.S. citizenship and many, many steps in between. Starting with applying for a visa, getting a green card, then finally applying for citizenship. Keep in mind that the total time to immigrate to the U.S. and become a U.S. citizen is between six and seven years.

Step 1: Apply For a Visa

You’re living in Country X when you realize it’s time to make your move. You want to immigrate to America.

The first thing you need to do is obtain a visa from the Department of Homeland Security’s U.S. Citizenship and Immigration Services (USCIS). A visa is a pass that allows you to enter the United States and stay here for a specific length of time. There are two types of visas:

If you’re immigrating based on family: Your sponsor begins the process by filing form I-130 Petition for Alien Relative with USCIS. Filing this form costs $535 and can be paid with a check or money order.

If you’re immigrating based on employment: Your sponsoring employer begins the process by filing form I-140 Petition for Alien Worker with USCIS. In some highly skilled employment categories, you can file the I-140 petition yourself.

Once your sponsor’s petition is approved by USCIS, you will have to:

If and when you’re approved — congrats! You are now able to enter and stay in the United States. Next stop: green card.

Step 2: Apply For a Green Card 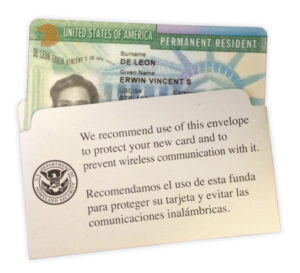 A visa allows you to stay in the U.S. for a set period of time, and when that time is up, you have to go. With a green card, however, you become a lawful permanent resident of the U.S., and you can live and work here indefinitely. Applying for a green card is the next step in the process of becoming a U.S. citizen.

Who can apply? People are granted green cards under similar categories that they are visas — i.e., based on having either family or employment in the U.S. Again, special categories exist, including status as a refugee or asylee (someone who has been granted asylum in the U.S.). It’s important to note that except for immediate family of U.S. citizens, a limited number of green cards are issued each year, and there are priorities and preferences for certain categories of immigrants.

Getting a green card based on family: Priority is given to the spouse, parents and unmarried children under age 21 of a U.S. citizen. These people do not have to wait for a visa to become available before they can get a green card.

Read: The Ultimate Guide on Getting a Green Card

Getting a green card based on humanitarian reasons: You may be able to get a green card through your status as a refugee or asylee.

Once the conditions are removed, you are granted a permanent resident green card. It’s valid for 10 years. You may renew it by filing Form I-90, Application to Replace Permanent Resident Card.

So once you have your permanent resident green card, now you can apply to become a U.S. citizen, right?

Ways to Apply for a Green Card

Fill Out On a Computer

Print the PDF and fill by hand with black pen.

Find a legal professional to complete the form.

Step 3: Apply for American Citizenship (after 3 or 5 years)

You must be a permanent resident of the U.S. (aka having your green card) for five years before you become eligible for naturalization (aka becoming a U.S. citizen). USCIS does permit you to submit your naturalization application up to 90 days before your five-year anniversary.

Are there any exceptions to the five-year rule? Yes, there are:

Next step: You’ve had your green card for three or five years (or however long USCIS mandates, based on your status), and you’d like to apply for citizenship. Now it’s time to file form N-400, the Application for Naturalization. A few important points about the N-400:

What happens next? Two things:

Ways to Apply for Citizenship

Fill Out On a Computer

Complete a Citizenship application with SimpleCitizen.

Print the PDF and fill by hand with black pen.

Find a legal professional to complete the form.

You are almost a U.S. citizen! The final step is the oath ceremony, where you swear an oath of allegiance to the United States. In some courts, you will swear your oath on the same day as your citizenship interview, but if a same-day oath ceremony is not available, USCIS will notify you by mail of your ceremony date and time.

What happens in the oath ceremony? Before a judge, you will pledge to:

Once you swear your oath of allegiance, you will receive your certificate of naturalization. Congratulations! You are now a full-fledged U.S. citizen with all the rights that grants, including freedom of religion, the right to vote, right to a fair trial, and of course, life, liberty, and the pursuit of happiness.

Are you eligible to apply for Citizenship?

Are you currently living in the United States?

Have you lived in the US for more than 3 months?

Did you enter the United States with an active visa or green card?

Are you married to a US citizen?

Do you have a Green Card?

Did you obtain the Green Card through marriage?

Have you had the Green Card for at least 2.5 years?

Have you traveled outside of the US for at least 6 months during the last 2.5 years

Have you had the Green Cards for atleast 4.5 years?

You are probably not eligible to apply.

If you would like to apply for a Green Card, instead of a Renewal, we can help you.

You are eligible to apply online for Naturalization!

Complete a Citizenship Application with SimpleCitizen
Citizenship Supporting Document Checklist
How long does it take to become a citizen?

Was this article helpful?

Yes No
Need help?
Can't find the answer you're looking for? Please contact us. We're here to help!
CONTACT SUPPORT